In a two-day workshop entitled “Media Accountability and Media Sustainability in the MENA Region”, the Erich Brost Institute for International Journalism (Germany) in cooperation with the Samir Kassir Foundation (Lebanon), provided an open space for discussions among media publishers and editors-in-chief from nine MENA countries. 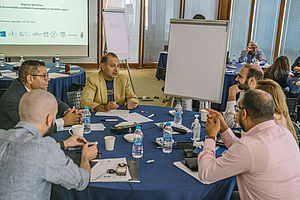 In a two-day workshop entitled “Media Accountability and Media Sustainability in the MENA Region”, the Erich Brost Institute for International Journalism (Germany) in cooperation with the Samir Kassir Foundation (Lebanon), provided an open space for discussions among media publishers and editors-in-chief from nine MENA countries. The workshop took place in Kempinski Hotel Amman, Jordan from 24th to 25th September 2021 with more than 30 participants from Algeria, Egypt, Jordan, Lebanon, Libya, Morocco, Tunisia, Sudan and Syria in addition to contributions from European media development professionals. It was moderated by Isabella Kurkowski, coordinator of the program “Media Accountability in the MENA Region” at the Erich Brost Institute for International Journalism together with Dr. Khaled Gulam, Dean of Art and Information College at the University of Tripoli.

The workshop explained what media accountability is by stressing on ways in which the media sectors of the region, with its vibrant civil society, are able to self-regulate without state interference on questions of ethics. Isabella Kurkowski, coordinator of the program “Media Accountability in the MENA Region” at the Erich-Brost-Institute for International Journalism, which has been financed by the Federal Foreign Office since 2020, presented the results of the 2021 pilot study “Media Accountability in the MENA Region” published by the Erich Brost Institute together with Karim Safieddine of the Samir Kassir Foundation. The analysis clearly shows in the results of the study that there is a connection between the implementation of media responsibility and independent financial sustainability. Academics from the MENA region such as Prof. Abeer Al-Najjar, Dr. Abdelmalek El Kadoussi, Dr. Fatima el-Issawi, Damian Radcliffe, Hadil Abuhmaid and Dr. Philip Madanat contributed with in-depth research to the media practitioners’ discussion on the links between media accountability and media sustainability. In the discussion, the importance of educating journalists on media accountability as well as media management was highlighted as a key step to be integrated into the curricula. Isabella Kurkowski, Program Coordinator of the Erich Brost Institute, introduced a newly established Online Resource Platform for Media Accountability for the MENA Region, which provides relevant insights for curricula as well as journalistic trainings related to media accountability in English and Arabic.

The workshop further demonstrated various challenges as well as common struggles and needs across different countries, specifically Tunisia, Iraq, Jordan, Morocco, Egypt, Syria, Lebanon, Libya and Algeria as identified by well-known media publishers such as Yasser Akkaoui (Lebanon), Imad El-Khazen (Lebanon), Naji Hadji (Algeria), Fatemah Farag (Egypt) and Mohammed Yousfi (Editor-in-Chief of Alqatiba web-magazine and a member of the Tunisian Press Council). These challenges include but are not restricted to the co-optation of syndicates, threats to free speech, political money induced by the lack of innovative and sustainable business models for the media, and the authoritarian tendencies of regulatory bodies. Lina Ejeilat, co-founder and Editor-in-Chief of the Jordan based 7iber media, in this regard also introduced her non-profit 7iber media platform, in which media accountability is integrated by the users interaction with editors. The platform is politically independent and Ejeilat stressed during the workshop the need  for news capacity that is dedicated to the user´s needs and not to that of an funding donor.

Participants vividly debated on a range of essential topics, such as the supposed “neutrality of media ethics”' and the question of journalistic loyalty to the audience. The Erich Brost Institute for International Journalism will publish very soon the results of its world-wide comparative study on media accountability practices across continents, with 44 exemplary countries from most different political and media systems analyzed. An intervention by Dr. Philip Madanat tackled the question of citizens’ trust in the media, especially when compared to other sectors and government institutions. Additionally, Olaf Steenfadt, from Reporters Sans Frontières (RSF), presented the Journalism Trust Initiative (JTI), which is a transparency and accountability tool for media outlets around the world. It provides a first-of-its-kind means for self-assessment and external audit of editorial processes. As a result, compliance with professional standards can be certified and thus, trustworthy sources of information identified and rewarded. This workshop marked the introduction of the JTI to the MENA region and participants expressed the demand to make it available also in Arabic. This development is particularly interesting because it leverages the concept of media accountability and provides a common standard for trustworthiness and transparency for the media community at large. Participants agreed that media trustworthiness is an integral part of media accountability in the interaction of media with its audience. Roula Mikhael, Executive Director of Maharat Foundation, highlighted the education of civil society on media literacy in this regards. Hazem Al-Amin, co-founder and Editor-in-Chief of the Lebanon-based Daraj Media, explained that readers and users are actually already engaged in taking part in the daily editorial and that this is an integrated tool of media accountability as users immediately react on published articles almost in real time.

In another intervention, Naji Haji, a media publisher and Editor-in-Chief from Algeria, delved into the contested contradiction between the Algerian state’s proclaimed statements on free press on the one hand, and the reality of media co-optation in the country on the other hand. State overreaching in editorial policies of media outlets and the dependence of media outlets on political elites have been identified as main cause which does not allow for proper self-regulation in many countries. Prof. Al-Najjar highlighted that a dialogue between the media community and civil society with the governments might be essential and can open new doors related to media accountability and applied ethics.

Workshop participants discovered the specific role of the one of the very rare ombudswomen in the MENA region, Ms. Narjess Mkhinini from Tunisia, who presented the daily work practice of ombudspeople in newsrooms. She highlighted that ombudspeople are a bridge of communication between the audience and users and the relevant media outlet as well as its journalists, without governmental interference. She emphasized that ombudspeople can be easily integrated into newsrooms as it is a voluntary and highly regarded task with no additional costs for the media outlet. The ombudsperson network in Tunisia was set up in 2014 with the support of the Erich Brost Institute for International Journalism.

Media sustainability was identified as an important prerequisite for implementing media accountability in the MENA region, as many media outlets struggle for financial sustainability and are often dependent on donor funding, which often neglects smaller independent media outlets. Participants expressed the need for funding flexibility tailored to the direct and immediate needs of media organizations in the context of crises. Ayman Mhanna, Executive Director of the Samir Kassir Foundation and Mira Milosevic, Executive Director of the Global Forum for Media Development highlighted the need for a better coordination of international donor organizations and the need to develop funding strategies for independent and small media initiatives which are often neglected by bigger donors as they often do not meet the criteria of applications for funds or simply do not have the capacity to fulfill donors’ requirements. A long-term strategy is here necessary, accompanied by new and creative approaches for self-sustainability. Ayman Mhanna called for “donor coordination and new creative models for financial sustainability of independent media to be applied at all levels and for future programs to include this perspective without making media exclusively reliant on donor funds.”

Participants in the two-day workshop agreed on a set of recommendations related to media accountability and media sustainability for the MENA region, specifically highlighting the need to:

The participants agreed furthermore to share these recommendations through the Erich Brost Institute’s Media Accountability Network for the MENA region (consisting of 41 members and 10 countries), as well as to step into dialogue with the Global Forum for Media Development related to the above issues in order to integrate the MENA actors’ views in international funding policies.