At the end of January, the Erich Brost In­sti­tute for International Journalism (EBI) of TU Dort­mund Uni­ver­sity or­ga­nized a dialogue workshop with a number of Polish media stakeholders in Warsaw, at which representatives of leading Polish media, the largest Polish and in­ter­na­tio­nal journalists’ associations, local publishing associations, and in­sti­tu­ti­ons engaged in media policy discussed together. The aim was to build bridges between these stakeholders and work towards establishing an independent press council at national level. 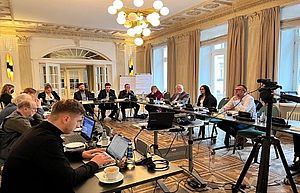 Sponsored by the ZEIT-Stiftung, a not-for-profit foundation, and in close cooperation with the partner universities in Warsaw and Wrocław, the Erich Brost Institute has been organizing successful dialogue formats in Poland on the topics of media self-regulation and media responsibility since 2020. “Research and teaching are indispensable components that can help to establish self-regulatory institutions in a very pragmatic way. The Erich Brost Institute has been working in this area worldwide since 2010,” says Professor Susanne Fengler, professor at TU Dortmund University and academic director of the Erich Brost Institute. For example, EBI researchers have recently developed international standards for media transparency in their latest publication “Global Handbook of Media Accountability”, in which they compared 44 countries.

At the EBI’s invitation, acclaimed media representatives, the largest journalists’ associations, and publishers from Poland discussed, on the one hand, the question of the future of the media in Poland and the risks for their development and, on the other hand, to what extent an independent press council might be able to provide a remedy. Poland, which after the fall of communism gradually introduced private media and aligned its media laws with international standards, is now experiencing a strong, politically motivated polarization of the media, which are being increasingly controlled by the right-wing conservative government. In 2021, a controversial media law was passed in Poland, which has been a member of the EU since 2004, prohibiting non-European firms from acquiring a majority holding in broadcasting companies. As a consequence, TVN (US Discovery Group), a channel critical of the Polish government, risks losing its broadcasting license. In addition, a growing number of lawsuits against journalists and media and the absence of an independent press council at national level in Poland are helping to diminish press and media freedom.

The dialogue workshop showed that all participants wish for an independent self-regulation mechanism in Poland. In a vote proposed by Isabella Kurkowski, lecturer at the Erich Brost Institute, all participants spoke unanimously in favor of setting up a working group on “Independent Self-Regulation”. “Future activities could lead to the establishment of an independent press council at national level – which should ideally have the backing of all journalists’ associations and publishers,” says Isabella Kurkowski.